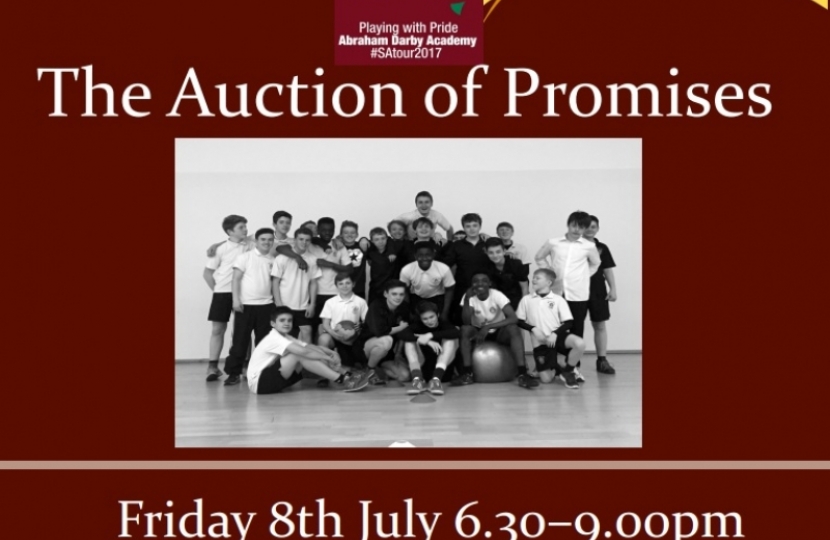 Telford MP, Lucy Allan was pleased to support Abraham Darby’s fundraising auction night by donating a tour of Parliament and lunch for two - a trip which sold twice!

The fundraising auction was held to help raise funds for 24 Abraham Darby Academy year 11 pupils embark on a rugby playing tour of South Africa in 2017. The tour, named playing for pride, has seen pupils learn business and marketing skills with assistance from Capgemini to raise the £20,000 needed to fund the tour.

The auction was strongly attended with 150 people bidding for around 50 varied lots, with a total of £4,500 being raised on the evening. The pupils are now two thirds of the way to achieving the funds needed for the tour.

Under the supervision of Director of Rugby, Will Bennett, the players have embarked on a number of fundraising initiatives including cakes sales, car washing, climbing the equivalent of Mount Kilimanjaro and 24 hour cycle and sleepover.

Speaking after the auction, Lucy Allan MP, said: “I was proud to be able to support these amazing young people. The commitment they have shown towards their sport and pushing themselves to get more out of it is inspiring.

“To raise the funds necessary for the tour is quite a task, but I am confident that the boys will be able to do it, especially with the support given by Director of Rugby, Will Bennett. Offering a lot for the auction was the least I could do and I was pleased to be able to help.

“As well as representing their school, they will be representing Telford and I am confident from the hard work and effort they have shown so far they will do the town well.”