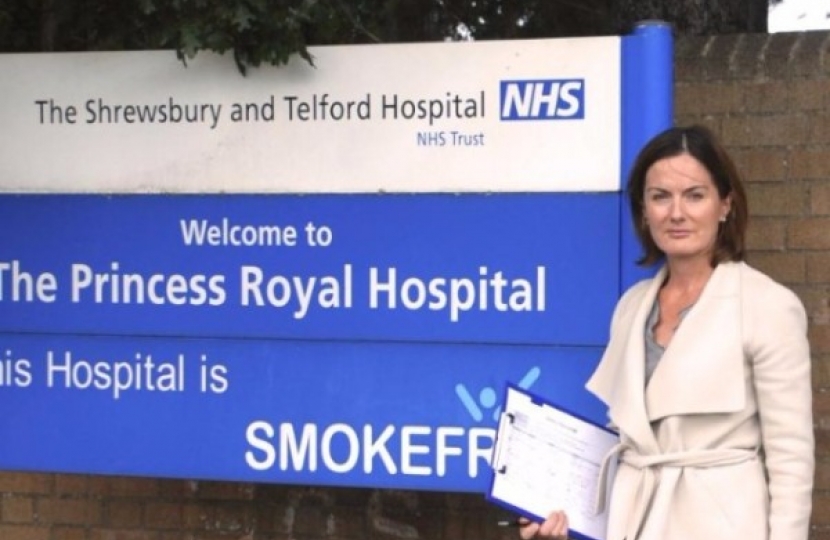 After more than 4 years of uncertainty, clinicians have unveiled their plans for the future of hospital services in Shropshire.  The Government has announced that £312m will be made available to fund these plans. The scale of this investment in our hospital services sends a clear message to those who feared cuts and closures.

We now see that a state of the art, specialist Emergency Centre is planned for the County. Patients with the most serious and life-threatening conditions can now be treated in the County.

We also know that both the County’s hospitals will each have a 24/7 walk in Accident and Urgent Care Centre.  This is will be a huge relief to those who thought that the Princess Royal was to lose this service.

My constituents have repeatedly and rightly said what they most want to see is 24/7 hospital services in Telford. If they had a life-threatening condition, they would expect to be taken to a specialist centre.  They don’t expect that centre to be on their doorstep. They do expect access to local 24/7 hospital services and this has now been confirmed.

So far so good.

But the clinicians have started from the premise that we have a blank sheet of paper. They take the view that the Women and Children’s Centre could simply move to wherever the new Emergency Centre is built.

But we are not starting with a clean sheet of paper – rarely does any organisation have that luxury. The Women and Children’s Centre has just been built and is delivering a fantastic service. It would be nothing short of a misuse of taxpayers’ money to relocate this new Centre.

We understand that we must all pay more for the NHS, but what most people cannot tolerate is a casual disregard for their hard-earned cash. To move the Women and Children’s Centre from Telford to Shrewsbury would be a shameful waste of money. This is where we need to jointly focus our efforts to get clinicians to think again with their proposals.

You can have your say by going to the website: www.nhsfuturefit.org