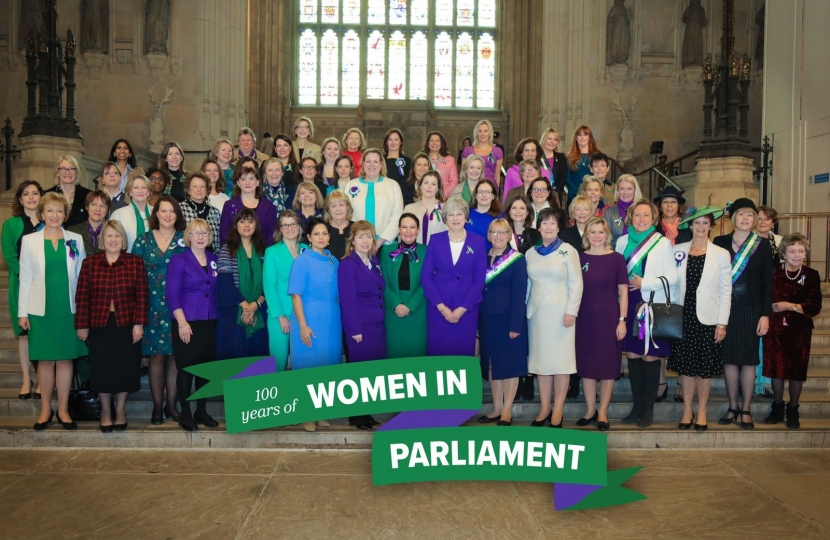 This month we celebrate the 100th anniversary of the ‘Representation of the People Act’ – a watershed moment and true symbol of democracy that gave 8.6 million women the right to vote for the first time.

This landmark moment was the result of a half century-long campaign by various strands of the suffragette movement – including the National Union of Women's Suffrage Societies and the Women's Social and Political Union, of which a relative of mine, Janie Allan, was a member.

This iconic moment in history paved the way for social change and changes in attitudes which eventually led to votes for all women no matter their title or status.

It opened doors that were until then closed, and allowed inspirational women, including Nancy Astor, to enter Parliament, Margaret Bondfield, to rise through the government ranks, to cabinet, Barbara Castle to successfully campaign for equal pay and work conditions for women and of course allowed Margaret Thatcher to become Britain’s first ever female political party leader and Prime Minister.

Since then, we have seen women’s voices in our political system grow, as well as important posts and groups established – including the office of Minister for Equalities, a parliamentary select committee for Women and Equalities – and, of course, another female party leader, and Prime Minister, in Theresa May.

So, we have come a long way.

But we are not there yet. In wider society, we still see disparities in gender pay in many of our public institutions; imbalances in our education system, in business, and in the media; hostility online and on social media towards women who express their views; and, emerging social issues such as violence against women.

In the political domain, too, there remain hurdles – with women comprising just 32% of our elected House of Commons. And while it is important that we maintain an approach – across our political systems – of appointing on merit, it is crucial too that we continue to remove barriers to entry and present an environment that is welcoming and respectful to all.

So, while this year we celebrate 100 years of women winning the right to vote, and many achievements since, we must also look to the future and maintain our strides towards a fairer and more equal society.

I hope we will use this symbolic year as an opportunity to send a positive message to the next generation.