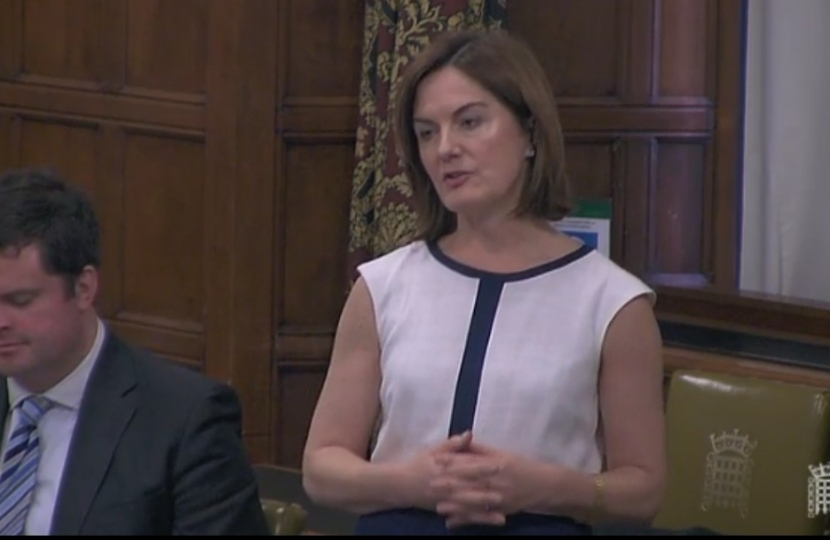 This afternoon, Lucy made a speech on child sexual exploitation (CSE) in Westminster Hall. You can watch her contribution to the debate on the  'rights of victims of crime' via the above video.

Full text of her speech is noted below:

Thank you, Mrs Main, for allowing me to speak in this important debate. I am delighted that the hon. Member for Leeds North West (Alex Sobel) has given us the opportunity to talk about the rights of victims and some of the difficulties that they have in getting their voices heard.

I particularly want to talk about the victims of child exploitation, following revelations in newspapers over the weekend in my constituency. These victims have more difficulties than most in getting heard, and in identifying that they are indeed victims, as my hon. Friend the Member for Torbay (Kevin Foster) identified. Child sexual exploitation is not just any crime. It affects whole communities up and down the country; it is not just Telford. It is a crime about fear, manipulation, coercion, shame, control, and sometimes blame. All too often, the victims are ignored. They are victims who do not have a voice, and for whom very few people will stand up and speak. I pay tribute to the hon. Member for Rotherham (Sarah Champion) for the amazing work that she has done in this field over so many years. She has given a voice to victims, and has set a precedent for us to follow in this House.

These young girls are too often white and working-class, and have multiple vulnerabilities. That is why the perpetrators are targeting them, and why they are so often miscast as bringing it on themselves, as indulging in risky behaviour, as being promiscuous and as somehow being to blame for what is happening to them. In their own minds, they often internalise the sense that they are somehow at fault.

When a 13 or 14-year-old girl is befriended by a 35-year-old man who gives her affection and cigarettes, tops up her phone, and tells her that she is beautiful and that he loves her, sometimes she feels affection for him. She does not realise that when he asks her to share a sexual image of herself, that will lead to something worse—something that she will not want to do. The coercion begins when he says, “If you don’t have sex with me”—or, “If you don’t have sex with my friend”—“I’m going to out you as promiscuous,” or as a “sket”, as they say in Telford. That is when it becomes a crime, but at that point, a 13 or 14-year-old does not know that what is happening is rape and child sexual exploitation. If she goes to the police, what does she say? She does not say, “I am a victim of statutory rape.” She says, “I’m being harassed by this person. He’s threatened to take a picture and put it on Facebook. He’s threatened to tell my mum that I’m a prostitute.”

Too often, victims of such terrible crimes do not articulate what is happening to them, so we have to be incredibly sensitive with them. Too often, they are not heard because of their vulnerabilities. I worry that a difficult family background or drugs and alcohol or mental health issues at home mean that victims are thought of as troublemakers and just a bit too difficult. Perhaps that is why these crimes were not identified for so long. Had the girls been from a different background and able to articulate more clearly what was happening to them, or able to identify that it was a crime, perhaps we would not have the cases that we see in Telford, Rotherham and Oxford.

I want to get on the record how incredible the hon. Lady has been for those women and girls. She is giving them a voice and empowering them to be heard. I am honoured to be here listening to her speech. I am sorry this is not an appropriate intervention, but it needed to be said.

I thank the hon. Lady for her encouragement and the inspiration that she provides to me and others in speaking out on this matter.

Interestingly, each child sexual exploitation case bears some resemblance to others. They all start in the same way and progress in the same way, from something that seems quite acceptable, tame or innocent into something horrific: trading young girls for sex for money. They are traded and handed around with the threat of violence to them or their families, or the threat of exposure and shame that I talked about earlier. The victims need to know that they have not done anything wrong. They need to know that they are victims and that a crime has been committed against them. That is why I am asking for an independent investigation into what has gone wrong in Telford. I first made the request in 2016, when there were revelations about what had happened. That request was turned down by the local authorities in Telford, who felt that there was no need at that time.

Further revelations have come to light. Nothing in the interim has changed my mind that an independent investigation will give victims a sense that they are being listened to. It will also give them answers as to why the situation went on for so long and why no action was taken. How did it happen? Why are our young girls being traded for sex in what has become a routine way? Whether it is from takeaways, taxis or betting shops, it is happening in our streets.

By not addressing what went wrong, victims are left feeling that in some sense they were at fault. It ignores what happened and perpetuates the silence. We have to break that silence and say it is okay to talk about this, and that it will not bring shame on Oxford, Telford or Rotherham or on their families. They are the victims and they need to be heard, listened to and given the protection that they need and deserve. Being questioned and questioned is an ordeal, and sometimes they feel they are not believed, but we must believe those young people and give them a sense that they will be listened to. There should not be opposition to finding out the facts and what went wrong.

There is a national inquiry into child sexual exploitation led by Professor Jay. That inquiry will not get to the bottom of why these things happened or give answers to my constituents in Telford. I urge the Minister, or anybody listening, to please put pressure on the authorities. It is for the good of our community and the victims and their families, because the families are victims too. They feel they failed their children and let them down. They suffer because their child has experienced terrible things. We must not allow these crimes to be minimised. They are not trivial. I am not talking about a girl with a 35-year-old boyfriend; I am talking about someone who is abused, exploited and sold for sex. We should not shy away from that and bury our heads in the sand.

I will draw to a close, but while the Minister is here I want to quickly mention the early release from prison of Mubarak Ali, a ringleader in Telford. He had been sentenced to 22 years—14 years in custody and eight years on licence—and he was released only five years after the trial. That caused a lot of shock, fear and anxiety among the people brave enough to come forward to give evidence, and the victim contact scheme let them down. More work must be done to ensure that victims are kept informed and can feed into the process and have the opportunity to be heard. We must listen and hear the voices of those children.