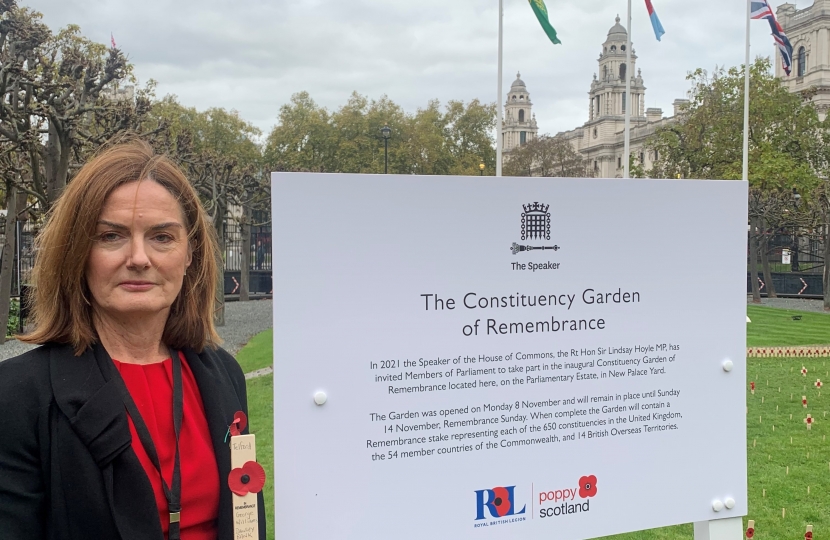 Signaller Williams, from 2/8th Battalion, The Worcestershire Regiment, was killed in action in France on 8th August 1918 - just three months before the end of the First World War.

Lucy, who lived in Dawley Bank when she first moved to Telford, wanted to commemorate a local man who had given his life for his country. The stake will remain in Parliament's Remembrance garden along with 649 others, one for each parliamentary constituency. These are joined by further 54 stakes representing the fallen from each Commonwealth country, and one for each of the 14 British Overseas Territories.

Sig. George Williams, son of Mrs. George Williams (Dawley Bank), and grandson of late Mr. Edwin Gough, who died from shell shock, received his education at Malinslee National School, but later transferred to Langley Council School, under the headmastership of his uncle (Mr. W.E. Gough) and eventually gained a free scholarship at Coalbrookdale High School, where he remained three years.

On leaving school he secured a berth as junior clerk to Messrs. G.H. York and Co. Wellington, where he remained up to June, 1917, when he joined the colours. He was drafted out to France on April 1 last [1917].

L.-Cpl. Smart, in a letter conveying the sad news to the bereaved mother, wrote:

“It is with regret I pen these few lines to tell you of the death of your son George. He was killed instantaneously from the concussion of a shell which fell in the dug-out in which he was on duty. I am sure it is a sad blow to you, for he was a comrade liked by all, always willing to do anything, and also a good soldier. He came to the battalion in April, and was sent to the company of which I am Corporal-in-charge.

I was not up the line at the time he was killed, as there were a certain number left out of the line, as they were only allowed to take a certain number of signallers into the trenches. I received orders to get ready with two more signallers, to move up with the rations at night for trenches. I then thought something had happened, the three of us being called up, and on arriving at battalion headquarters I learnt the sad news. It was with a heavy heart I went into the trenches, for I had taken a liking to him, and felt as if he were a brother.

There were two other signallers with him on the day, one was wounded in the leg and arm and the other had a very bad attack of shell shock. All the fellows left out of the lines attended the funeral, with the drums and bugles”.

“I should like to tender my sincerest sympathy to you in your loss. Your son was a good soldier, always bright and cheerful, and I feel his loss greatly. I had charge of the party attending the funeral, and can assure you that everything was carried out well. He lies in a little cemetery, near his colonel, who was buried the following day.”