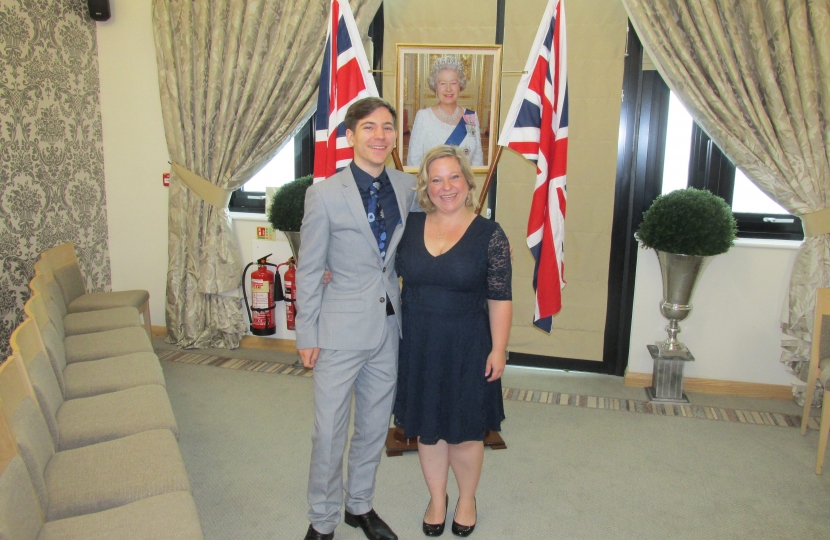 Peter was born in Canada in 1998 but moved to the UK the next year as a 16month old so his mother, Joanne a British citizen by descent and passport holder, could help look after her ill father and Peter’s grandfather.

Prior to being old enough to apply for citizenship himself, Peter and his mother faced a number of obstacles and pressures preventing them applying for citizenship for Peter whilst he was a child.

Having turned 18 and secured a place at Cardiff University to study engineering, Peter was at risk at losing his place as he was unable to apply for a student loan whilst his adult citizenship application was being processed by the Home Office. Having contacted Lucy’s office, Lucy took up Peter’s case with the Home Office to see that his citizenship was secured in time for Peter to apply for his student loan and commence his university course.

Speaking after his ceremony today (28th August), Peter Garvey said: “It’s great to officially be a British citizen and to know that I’ll be able to take up my place at Cardiff University.

“Having lived in the UK since I was 16 months old I’ve always considered myself British, especially as my mom, brothers and grandparents are all British citizens.

Peter’s mother, Joanne Garvey, added: “We’re both so grateful to Lucy and her office for helping to progress Peter’s application. It’s been a convoluted process but I’m so pleased that it has now all been put to bed and he will be able to take up his place at university. This will be a life changing time for Peter and I’m very proud mother”.

Lucy Allan MP, said: “Helping people like Peter and Joanne with a matter like this is exactly the sort of thing an MP can do and it is most rewarding when we are able to do so. By anyone’s standards Peter is British and the fact he can go on to a top university demonstrates the determination and aspiration that is a key British and Telford virtue”.