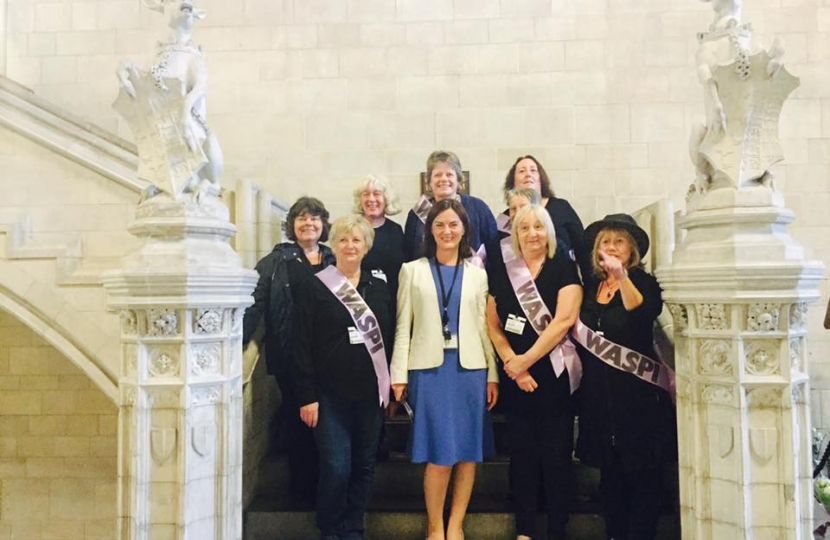 Having met with WASPI campaigners both in Telford and Parliament Lucy is keen to see transitional support is given to those women affected by the changes.

Many women of the generation affected, did not have the education opportunities or training that are available today. In addition, many left work upon becoming married or having children. Divorce, has in numerous cases, had an impact, with women not afforded the same rights as they would be today.

Lucy Allan MP said: “Low paying jobs, minimal employment rights and little chance to build a private pension pot was the normal start to working life for most women. At that time most working women worked in lower paid 'women's jobs' such as cleaning, caring, waitressing and shop work. In addition, marriage and children may have meant sacrificing employment to stay at home leading to a reliance on their husbands. In the case of marriage breakdowns women were not provided for as they would be today.

“We are told people are living longer which is true, but we should not forget the differential in mortality rates between rich and poor areas. In areas like Telford, not only are there higher rates of premature death but where health outcomes are significantly below the national average. It is not always possible to remain economically active later in life for health reasons. This is particularly the case where people are working in lower paid manual occupations which depend on their physical abilities.

“The cumulative impact of a lack of opportunity, low paying work and, for some, divorce, has left part of a generation facing an uncertain future. Despite having a wealth of experience these ladies are often unable to access employment opportunities to make up the shortfall.

“The Scottish National Party brought a proposal to Parliament at 24 hours’ notice, without consultation with the WASPI All Party Parliamentary Group. I am not aware whether WASPI ladies in Telford support the SNP proposal and the financial implications are unclear. I will continue to work with Government to engage them with the specific challenges WASPI women face to find an acceptable solution. It is an issue which has a greater effect on women in lower income areas. I want the Government to recognise the very specific circumstances that women from this generation face and think again on this issue."