Lucy Allan, Chair of the APPG on New Towns calls on Government to put New Towns centre stage in Budget 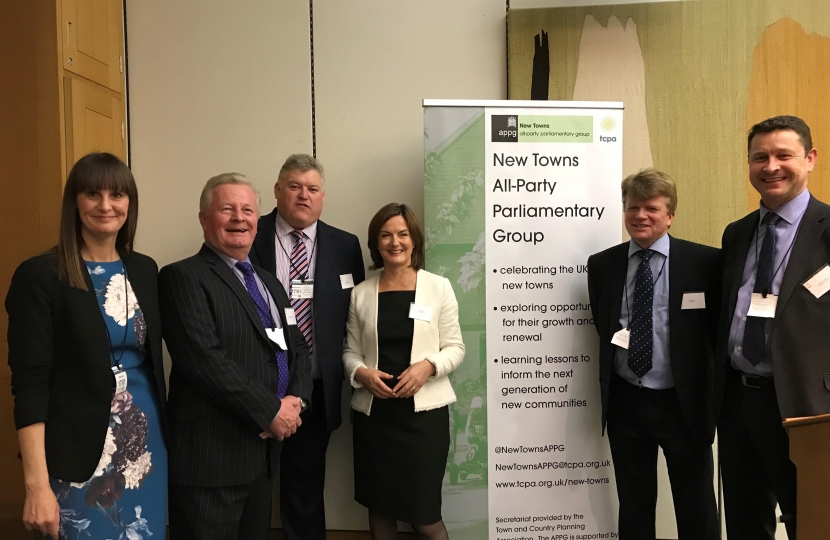 As Telford celebrates its 50th anniversary, Lucy Allan MP and Chair of the Cross Party Parliamentary Group on New Towns joins MPs from across the political spectrum, representing New Towns, to call on the Chancellor to invest in their future.

The All-Party Parliamentary Group (APPG) on New Towns, which has been set up to celebrate the contribution made by the UK's New Towns and to highlight the challenges they face, has written to the Chancellor with three key asks of the 2018 Autumn Budget:

1. New Towns should be included in a Ministry of Housing, Communities & Local Government (MHCLG) Minister’s list of key responsibilities to help unlock their potential and give New Towns the national attention and focus they need and deserve.

2. Government should publish a New Towns prospectus setting out how they can support existing new towns to regenerate and grow through providing tailored Government support to local areas with ambitious and innovative proposals. This would include capacity funding.

3. Government should review the tools and powers local authorities need to transform the town centres of New Towns in order to unlock their potential for growth and renewal including the regeneration of shopping areas.

Chaired by Lucy Allan, MP for Telford, the APPG has published a manifesto to shine the political spotlight on growth opportunities in the UK’s existing New Towns.

“The New Towns are some of the fastest-growing and most successful communities in the UK and have enormous potential for future growth, but they are also facing significant regeneration challenges and are home to some of the most deprived communities.

“The New Towns’ design and architecture and strong sense of civic pride make them unique and could prove to be catalysts in their renewal. However, as a result of building at speed – and, often under the constraints of the day, using cheap materials – whole estates are now in need of renewal, putting a significant burden on local authorities, while tired-looking buildings affect contemporary perceptions of what were once ambitious schemes.

“There is a significant opportunity to turn the challenges faced by the UK’s New Towns into opportunities, which is why the APPG on New Towns has launched a manifesto and written to the Chancellor today.”

Kate Henderson, Chief Executive of the TCPA, which provides the secretariat for the APPG, said:

“The post-war New Towns programme was the most ambitious large-scale town-building programme ever undertaken in the UK, and today the New Towns provide homes for over 2.8million people.

"Through our research we have found councils often lack the capacity and resources to unlock the potential of the existing new towns. For this reason, one of the APPG’s key asks of Government is a New Towns prospectus setting out how they can support existing New Town regeneration and growth through providing tailored Government support to local areas with ambitious and innovative proposals. This would include capacity funding for councils along the lines of the Government’s locally-led garden villages, towns and cities programme and has the potential to ensure the revitalisation of the existing New Towns goes hand-in-hand with the Government’s support for a new generation of garden communities.”