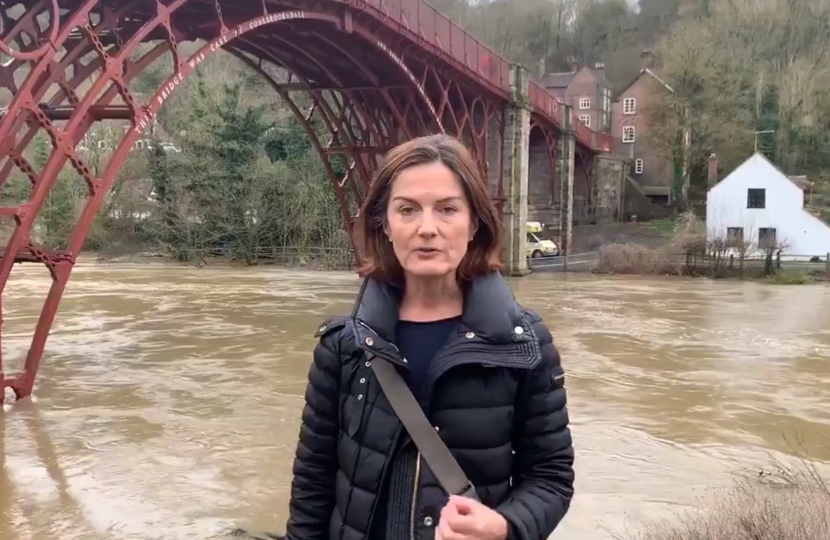 Many properties and businesses in Ironbridge were badly flooded following Storm Dennis, although in the most part the flood defences held and prevented further damage. My thoughts with those who are dealing with the devastating effects of flooding to their homes and businesses, and I have been lobbying Ministers and the Government for financial support for those affected.

The Government has announced a number of grants and schemes to compensate those affected by the floods, to be administered by the local authority. The measures announced thus far are:

Community Recovery Grant: eligible local authorities will receive funding equivalent to £500 per flooded household to help communities and vulnerable people in areas severely affected by the flooding with their immediate recovery. It is for local authorities to decide how to allocate this to meet local need. This could include, but is not limited to, individual household hardship payments.

Business Recovery Grant: eligible local authorities will receive £2,500 per eligible small and medium-sized enterprise (SME) which have suffered severe impacts from the floods which cannot be recovered from insurance.

Council Tax Discount: Government will reimburse eligible local authorities for the cost of providing 100% council tax relief, for a minimum of three months, for residents whose property has been flooded, or which is considered unliveable, as a consequence of either storm.

Business Rates Relief: Government will reimburse eligible local authorities for the cost of providing 100% relief from business rates, for a minimum of three months, for those business directly impacted by either storm.

In addition to the framework, the Department for the Environment, Food & Rural Affairs (DEFRA) has announced the activation of the Property Flooding Resilience Grant for eligible flood-affected areas. Flood-hit homes and businesses can receive up to £5,000 to help them make changes which will reduce damage levels should flooding reoccur. The Local Government Secretary also announced the government would convene the cross-Whitehall Flood Recovery Taskforce, including Environment, Business and Transport Ministers to provide areas like Ironbridge with bespoke support and guidance. I have been informed that the first meeting will take place this week.

Telford & Wrekin Council will be administrating government grants and can be contacted directly on 01952 384000.