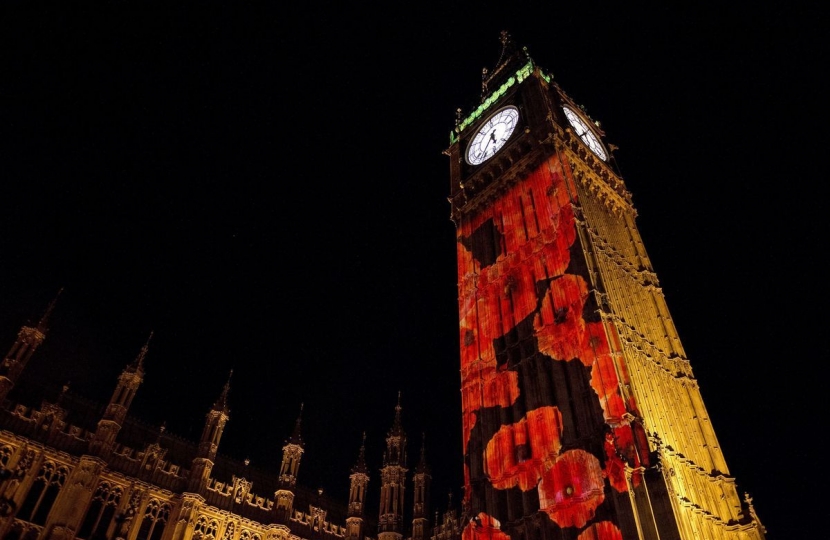 This Remembrance Sunday, 8th November 2020, Big Ben will sound 11 times to mark the start of two minutes’ silence at 11am, joining bells across the country and worldwide to commemorate those that lost their lives in the two world wars and later conflicts.

Despite recent conservation works to safeguard the 159-year-old iconic clock for generations to come, Parliament has maintained its commitment to ensuring Big Ben can still sound for important national events, such as New Year’s Eve and Remembrance Sunday. This Remembrance Sunday has a particular significance as it marks one hundred years since the Cenotaph was unveiled by King George V on Armistice Day 1920.

The National Service of Remembrance at the Cenotaph will be closed to members of the public in line with the latest expert medical and scientific advice. The service will go ahead with representatives of the Royal Family, the Government and the Armed Forces, and a small representation from the Commonwealth, other countries and territories, all laying wreaths.  The annual march past the Cenotaph will not take place, but some veterans will be invited to attend the service.

Whilst it is deeply disappointing that the march will not be taking place this year, we can all still play a part in ensuring we mark the occasion appropriately and pay tribute to the service of our Armed Forces on Remembrance Sunday. The public are urged to remember all those who made the ultimate sacrifice for our freedoms by coming together for a national moment of silence at 11am while the service is broadcast nationwide on BBC One, Sky and ITV.

“Remembrance Sunday this year will be unlike any other, but it is so important that we are able to remember the sacrifice and service of others, who died for our freedom and future.

We must not let these difficult times stop us from paying our respects and we should be proud of the way communities across Telford and the entire country have adapted, so that we may still come together to honour who gave so much for our liberty and peace.”

“This Remembrance Sunday has a particular significance as it marks one hundred years since the Cenotaph was installed.

Whilst we will mark this occasion properly, it is with a heavy heart that I must ask people not to attend the ceremony at the Cenotaph this year in order to keep veterans and the public safe.

We will ensure our plans for the day are a fitting tribute to those who paid the ultimate sacrifice and that our veterans are at the heart of the service - with the nation able to watch safely from home.”

“I am as disappointed as the rest of the armed forces community that our usual arrangements for Remembrance Sunday cannot go ahead as normal.

However, like the successful VE and VJ Day commemorations, the Armed Forces will join with The Royal British Legion to lead the nation once again in showing our respects to those who have made the ultimate sacrifice.”

“The decision not to proceed with the annual March Past the Cenotaph has been taken by the Government based on expert advice to protect the health and well-being of all those would have been travelling to and participating in the event.

Whilst it is deeply disappointing that the march will not be taking place this year, we can all still play a part in ensuring we mark the occasion appropriately and pay tribute to the service and sacrifice of our Armed Forces on Remembrance Sunday.

We are encouraging people across the country to participate in their own personal moment of Remembrance whether that be watching the Service on television or pausing for the Two Minute Silence.”

“Remembrance Sunday holds a special place in our national life and I know that many people will be disappointed that they won’t be able to attend this year.

But the key part of Remembrance is taking a moment to recognise those who have given their lives protecting this country. I hope that everyone will still be able to reflect on this sacrifice this year, despite the different arrangements.”

Government support for Telford and Wrekin Council throughout the pandemic

Throughout the pandemic, the Government has supported local authorities such as Telford and Wrekin Council with a total of £4.6 billion across England.